The Allegory of the Christ Spirit

Today I tell you about the allegory of the Christ Spirit from the Mozart oratorio "The Obligation of the First Commandment".

The Christ Spirit is the allegory for Jesus. He begs and pleads with Justice and Mercy for their help, for it pains him to see the lukewarm Christian living towards his own abyss.

After Justice and Mercy are initially unconvinced that they can help him at all, he sings his first aria, "With sorrow I must look".

"With lamentation I must behold countless dear souls in my enemy's clutches choose destruction, if your miraculous power does not create salvation, not rescue."

Mercy then tries to explain to him why her help is of no use. I have already told you about this in an earlier episode.

Justice, however, allows herself to be softened, and I have already made an episode about that too.

After the Christian awakens from the nightmare, the world spirit immediately appears, who does not want to have this soul taken away from him. The Christian spirit then disguises himself as a doctor in order to help the Christian a little more unnoticed by the world spirit. So he explains to him that he has an illness which is all the worse because it is hidden from him.

While the world spirit goes away to prepare a seemingly harmless breakfast with friends, the Christian spirit is able to speak more openly to the Christian.

He then sings the second aria, "Manches Übel will zuweilen".

That call which awakened you, that voice which frightened you, was necessary to you, was good to you."

With this he makes it clear to him that the nightmare was necessary so that he wakes up and realises where he will end up if he continues like this.

You notice that the Christian begins to understand the message. The Christian spirit finally gives him a letter that contains an important message for him, which is like a medicine for him.

Now the big question, what does this letter say? It is very reminiscent of the passage when Jesus writes on the ground in the 8th chapter in John's Gospel when he says to everyone "Let he who is without sin cast the first stone".

There are different variations on what it could be. In our team, ideas are circulating about the Beatitudes, a very personal message or, since the work is called "The Obligation of the First Commandment", the first commandment, the threefold commandment of love.

Everyone may consider for himself what may be in it.

The Christian spirit is interrupted by the world spirit, which picks up the Christian for breakfast.

Mercy and justice see in it the confirmation that he can no longer be saved.

The Christ-spirit, however, advises:

"How can a lukewarm heart, covered with snow by the spirit of the world, immediately burn with God's love? The beginning, however, gives me the appearance of hope."

No posts published in this language yet
Stay tuned... 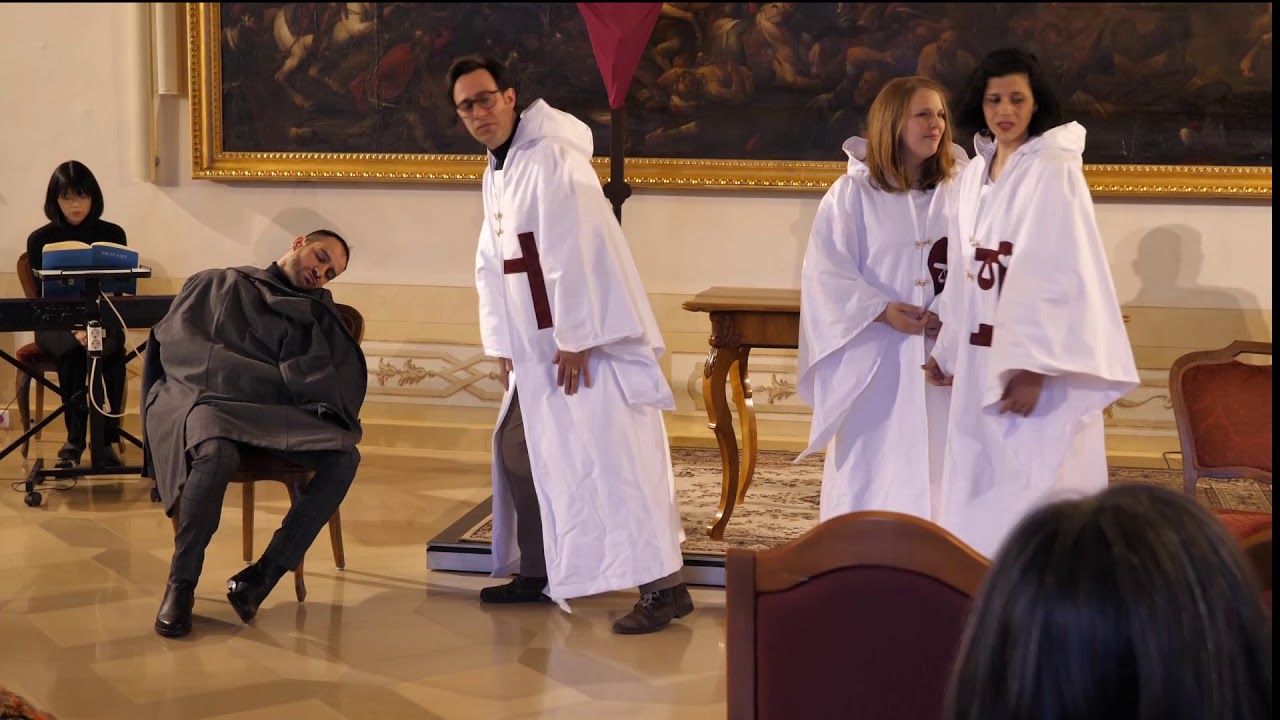